Hector Pieterson rushed to a medical clinic during Soweto Uprising, 1976 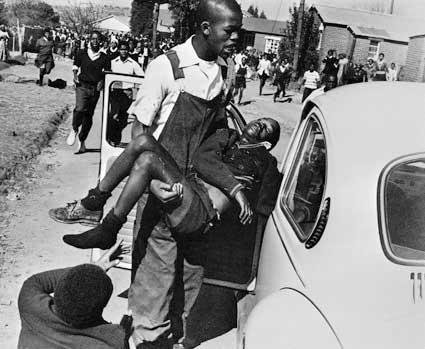 Hector Pieterson rushed to a medical clinic during Soweto Uprising, 1976

This 1976 photo shows a mortally wounded Hector Pierterson being loaded into a Volkswagen Beetle by Mbuyisa Makhubo while Antoinette Sithole, Pieterson's sister, falls to her knees. All three were student protesters who took part in the Soweto Uprising on June 16, 1976 when thousands of Black South African students participated in a non-violent march against forced Afrikaans instruction. The South African Police responded with military force, shooting and killing student protesters like Hector Pieterson. Makhubo loads Pieterson into Sophie Tema Mosimane's Volkswagen Beetle. Tema Mosimane was a journalist who covered news and human rights for The World, a Black newspaper based in Johannesburg, and worked with the photographer who took this photo, Sam Nzima.