Photojournalist Sam Nzima in front of his liquor store in Lillydale 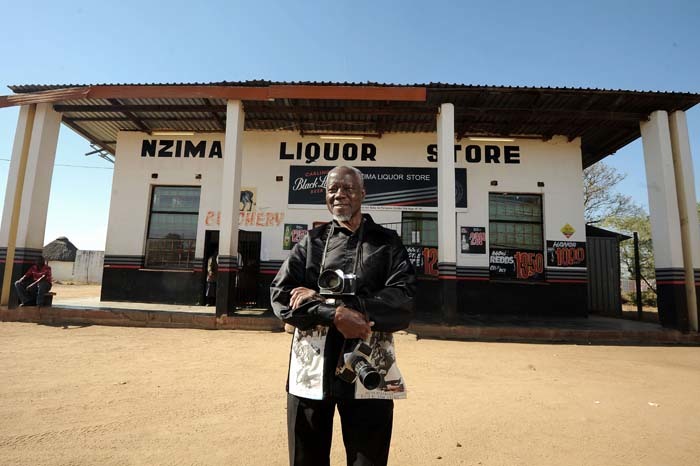 Photojournalist Sam Nzima in front of his liquor store in Lillydale

South African photojournalist Sam Nzima is shown outside of his liquor store in his hometown of Lillydale in Mpumalanga, a province in eastern South Africa in 2014. In his hand and around his neck are the Pentax Cameras he used as a photojournalist for The World, a Black African magazine based in Johannesburg, and that captured the iconic photos of Hector Pieterson and the Soweto Uprising.

Nzima captured images of the Soweto Uprising on June 16, 1976 when peaceful student protesters were fired upon by heavily armed South African Police officers. The photos of Mbuyisa Makhubo carrying the mortally wounded Pieterson, a 14 year old student protester, while Pieterson's sister Antoinette Sithole ran beside the boys in horror became a defining image of the Soweto Uprising.

After the photographs of Hector Pieterson and the police violence during the Soweto Uprising were published by The World and other publications, Nzima received many death threats from government and police officials. The threats forced Nzima to leave his position at The World, and flee back to his hometown of Lillydale. Nzima, though a prolific and well known photographer, struggled for years to earn the copyrights to his iconic photographs and did not receive reasonable compensation by those who used his famous photographs, including from the African National Congress or the Hector Pieterson Memorial and Museum.